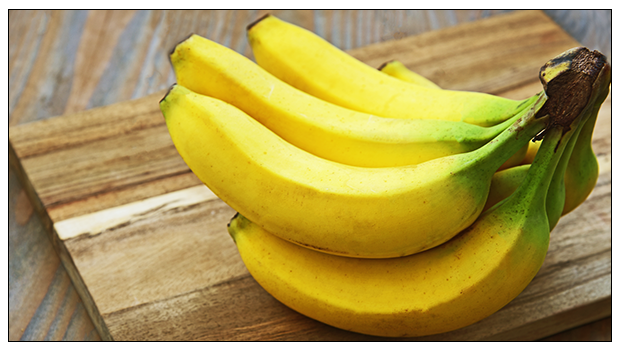 Banana, based on the origin and temperature of the area where it grows is described as tropical fruit. Since found abundantly in the tropical rain forest areas. Bananas are the fourth most important cultivated crop in developing countries.

Bananas belong to the genus Musa and family Musaceae. It is a versatile fruit, it can be eaten raw, cooked, roasted and brewed also. Banana, when it is cooked as a vegetable, is called a plantain, While banana benefits health in more than a hundred ways, here are the top 10.

The major component of bananas is water, almost 75 %. The energy given by 100 grams of banana is 89 kcals. One medium-sized banana that weighs about 118 grams provides about 105 kcals.

Banana has about 23 grams of carbohydrate per 100 grams. Out of the carbohydrate present in banana half of it is in the form of sugars, that is about 14 grams. Because of the energy value, banana benefits athletes.

A medium sized banana has about 3 % fiber. Dietary fiber is the carbohydrate that resists digestion. Banana is known to regulate bowel movement whether it is constipation or diarrhea.

Banana is a good source of potassium 100 grams provide 358 mg. Potassium is an essential mineral and it performs several important functions in the body. Potassium has a protective effect on heart health because potassium lowers blood pressure. Banana benefits blood pressure as well since they are also low in sodium.

Vitamin C is a potent antioxidant and banana is a good source of vitamin C. 8.7 mg vitamin C in 100 grams of banana. A medium-sized banana will give you about 10 mg of vitamin C. Vitamin C has a role to play in immune system function and it also enhances dietary iron absorption.

Banana benefits your skin and overall health since they also contain phytochemicals such as phenolic compounds and carotenoids which have antioxidant activity. Phytonutrients or bioactive compounds as they are also called have several health-promoting properties.

Banana is also a good source of vitamin C a potent antioxidant. The antioxidants can reduce the risk of several degenerative chronic diseases.

Resistant starch and dietary fiber of banana act as prebiotics and because of bacterial fermentation in the large intestine short-chain fatty acids (SCFA) are formed.

Hypertension is a major risk factor of heart disease. Banana benefits your nerves since it is a rich source of potassium and has very little sodium. Both of these factors reduce blood pressure. Banana has an antioxidant activity which is also cardioprotective.

Banana is a cheap source of energy and along with calories it also provides antioxidants. After a prolonged and intensive work out, banana acts as an effective source of energy.

If a medium-sized banana has 14.4 grams of sugars, the individual sugar content was glucose 5.9 grams, fructose 5.7 grams and sucrose 2.8 grams. The Glycaemic Index (GI) of banana is 51, it falls between low to moderate GI value.

Diabetics should take care not to eat a very large and very ripe banana. Do not overdo it because it contains sugar but can be consumed as one of the fruits in the diet. Variety and moderation are the keys to reaping all the banana benefits. Diabetics monitor your blood sugar levels.

Banana is a very popular fruit as it is one of the most consumed fruits. According to WHO a person should eat 400 grams of fruits and vegetables a day to reduce the risk of chronic diseases.

Banana is a fruit packed with energy, nutrients and health benefits. It is one of the most-liked foods by children and adults alike. It can be used in several recipes and can be eaten as such. It is a good energy provider for athletes too. Diabetics can consume banana but in moderation and keep an eye on your blood sugar levels.

Add it to your balanced diet and witness the banana benefits on your overall health.