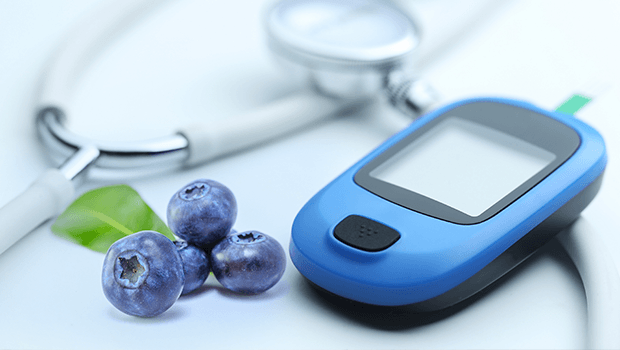 Are Blueberries Good for Diabetics?

Diabetes prevalence is increasing at an alarming rate worldwide. According to World Health Organisation diabetes was the seventh leading cause of death in the year 2016, about 1.6 million deaths were directly due to diabetes (1).

Diabetes is a chronic disease in which blood sugar levels are not regulated the way they should be. When food is consumed and carbohydrate is broken down into glucose. The glucose is taken up by blood and transported to other tissues. Pancreas releases insulin hormone which regulates blood sugar levels.

If pancreas does not produce sufficient insulin or the body is unable to use the insulin released by pancreas efficiently the blood sugar levels become elevated. This condition is called hyperglycaemia which is the result of uncontrolled diabetes. If this condition continues over a long period of time it may cause harm to other organs of the body such as heart, kidneys and eyes (1, 2).

Are blueberries good for diabetics?

The health benefits of blueberries are mostly attributed to anthocyanins (3).

The glycaemic index of blueberries is 53 and glycaemic load per serving 5 (4). Blueberries can be considered as low glycaemic food, therefore can be consumed by diabetics.

Insulin resistance is defined as a reduced responsiveness of a target cell or a whole organism to the insulin concentration to which it is exposed (2).

The cells show reduced sensitivity to insulin and it is closely related to the development of type 2 diabetes (T2D) (5). The blood glucose levels are elevated T2D.

In a human study the participants were given a daily supplementation of blueberry bioactives in the form of 45 grams of freeze-dried blueberry powder. This was equal to about 2 cups of fresh whole blue berries.

It was a 6 weeks study and it was concluded that blueberry powder enhanced insulin sensitivity in obese, nondiabetic, and insulin-resistant participants (6).

When the insulin sensitivity in increased the blood glucose levels are better regulated.

In a review of work done on blueberries it was stated that regular moderate, intake of blueberries reduced the risk of type 2 diabetes and cardiovascular diseases (3). Those with T2D are at a higher risk of developing heart diseases.

Blueberries because of the anthocyanin content exhibit antioxidant activity. At the same time, they have beneficial effect on regulating blood glucose levels in diabetic people and reduce the risk of cardiovascular disease. Include them as part of a balanced diet for people afflicted with diabetes.