Reasons to make Besan a part of your diet!

Reasons to make Besan a part of your diet! 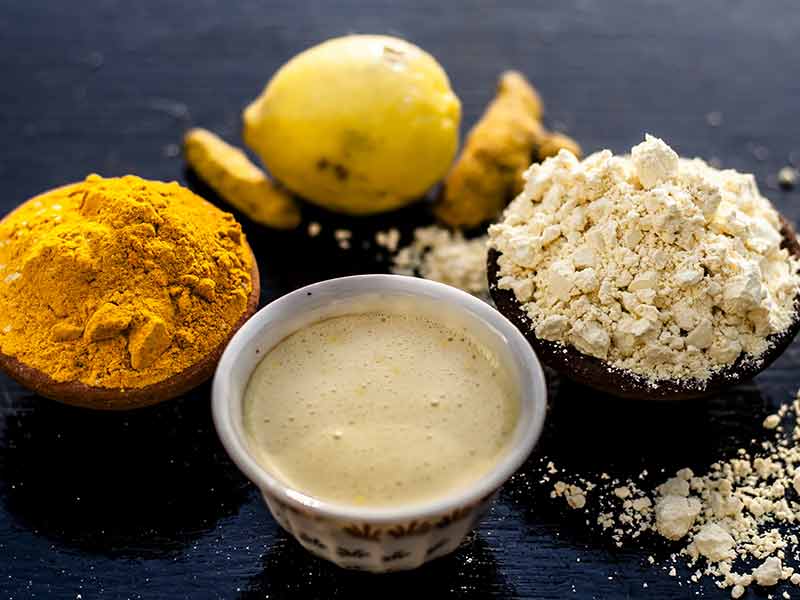 From mixing it in raw milk for a DIY at-home face mask to making a spicy batter for some piping hot pakoras (fritters) during monsoon – you may have used besan several different ways. Truly, it is one of those flours that do not get its due credit! Besan is the unsung hero of our pantry!

Apart from being a versatile food item, besan benefits us in many ways. In this post, we will take an in-depth look at besan benefits along with its nutritional profile.

Besan, or chickpea flour, is prepared by milling Bengal gram or garbanzo beans (chole). The resultant legume-based flour retains its mild nutty flavour. Roasting besan benefits its aroma and adds intensity to its taste. Considering that it is gluten-free, it is an excellent substitute for whole wheat flour. Further, it has a low GI and offers better blood-sugar management, making it a suitable flour for people with diabetes.

Besan benefits may be attributed to the following nutritional profile:

Following are a few of the well-known besan benefits:

Garbanzo beans, being a legume, are packed with proteins. Thus, it should not come as a surprise that chickpea flour contains the highest amounts of proteins, even more than whole wheat flour! It is especially useful for those on a vegan or plant-based diet as it also contains eight essential amino acids.

Apart from the high protein-content, besan is also a good source of healthy, unsaturated fats. Furthermore, it contains a good amount of complex carbs, which prevents blood-sugar spikes. Overall, it is an excellent substitute for wheat flour as it offers better nutrition without any loss of taste, flavour, or texture.

If you are looking to shed a few pounds, then you can count on besan benefits to support your weight loss journey. For starters, it contains fewer calories when compared to refined wheat flour (maida).

Next, besan helps in the regulation of the hunger hormone, ghrelin. Lower concentrations of ghrelin indicate fullness. An observational study conducted on 16 women in 2018 discovered that subjects who consumed besan-mixed pastry had lower levels of ghrelin than those who ate a pure white flour pastry.

Finally, chickpea flour is loaded with proteins and dietary fibres. As a result, it offers sustained energy for longer durations and promotes satiety.

Thus, besan cuts down your calorific intake, reduces cravings, and makes you feel full for a longer duration, which is the perfect recipe for weight loss! Plus, there are several ways to include besan for weight loss. For example, you could make anything from besan cheela to dhokla to crackers as a healthier snack to swap out junk foods.

Besan contains polyphenols, which are highly beneficial antioxidants. Besan benefits the body by introducing antioxidants in the body that neutralise free radicals present in food. Further, it also reverses its damaging effects.

Chickpea flour can also reduce the acrylamide concentration present in flour or potato-based processed snacks. Acrylamide is an unstable, carcinogenic compound that is a byproduct of food processing. A study published in Food and Chemical Toxicology compared different flours and compared the byproduct to discover that besan produces the least amount of acrylamide when heated.

Besan Benefits for Skin and Hair

To enjoy besan health benefits, you do not have to necessarily consume it! Using besan on your skin is the oldest home remedy. It helps with skin exfoliation, treat acne, even out complexion, and even remove fine facial hair!

You can also use besan paste in your hair to cleanse it. Such a hair mask promotes hair growth, helps fight dandruff, and moisturises the scalp. Therefore, it keeps you healthy and glowing from inside out!

From the above, it becomes apparent that besan benefits are real, tangible, and plentiful. So start including it in your diet to enjoy all the besan benefits!