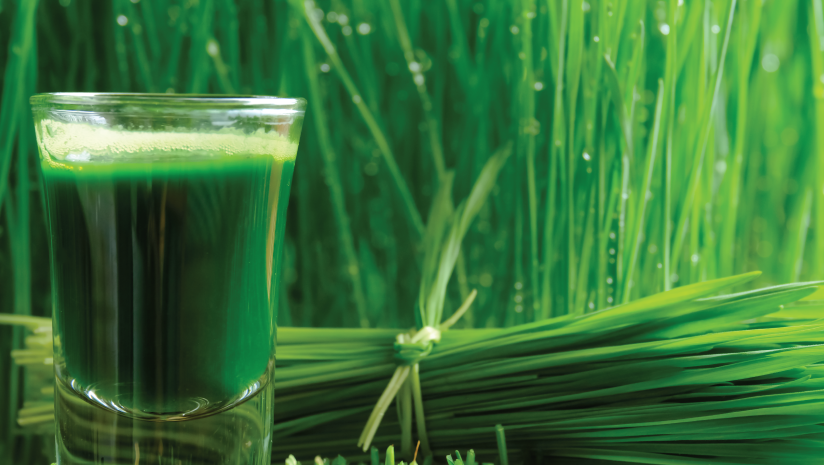 It plays a pivotal role in the domain of medicine and offers copious health benefits. Over the years, wheatgrass has gained popularity as it prevents diseases, boosts metabolic energy, and lowers oxidative stress.

People consume wheatgrass for cancer treatment in the form of tablets, juice, powders, or even fresh.

Wheatgrass is also gaining widespread popularity for its therapeutic benefits against AIDS as well as cancer.

Wheatgrass contains a decent amount of chlorophyll that has similar molecules as that of our human bodies. Wheatgrass thus helps maintain haemoglobin content in the blood.

Wheatgrass is rich in antioxidants, and a few test-tube studies have confirmed that it can help kill cancer cells.

One test-tube study concluded that wheatgrass extract decreased the spread of mouth cancer cells by 41%. Another test observed about 65% cell death and diminished leukaemia cells within the first three days of treatment using wheatgrass.

Some research proposes that wheatgrass juice, when combined with conventional cancer treatment, can help reduce the detrimental aftermath of the treatment.

You must practice the daily consumption of organic foods as they adhere to international standards of healthy meals. Organic farming safeguards the environment because of its eco-friendly cultivation practices.

In a study, 60 breast cancer cases exhibited a decreased risk of functional impairment of bone marrow after their chemotherapy when they had consumed wheatgrass juice.

Benefits of wheatgrass for cancer treatment

Most of the cancer treatments come with several side effects such as nausea, lack of appetite, and many more.

Wheatgrass benefits cancer treatment as it is an Ayurvedic as-well-as a natural therapeutic plant and can thus treat various symptoms that include breast cancer symptoms, lung cancer symptoms, and others.

As per a recent study, wheatgrass plays a pivotal role in alleviating the sense of fatigue and infections in cancer patients who are undergoing chemotherapy by boosting immunity.

Because of the beneficial effects of wheatgrass, some studies have shown that wheatgrass can substitute various toxic drugs used nowadays to treat cancer.

While fighting cancer, our body gets injected with numerous chemicals to wipe out the cancer cells. These chemicals also end up poisoning the healthy cells, leading to side effects such as nausea, vomiting and pain.

Wheatgrass houses the potential of fighting cancer while being harmless to the healthy cells in the body.

There have only been a few side-effects of wheatgrass and only in specific cases who consumed it.

Other benefits of wheatgrass for cancer treatment

Wheatgrass helps eliminate toxins and, thus, plays an indispensable role in ridding the body of impurities, especially if a patient is going through chemotherapy sessions.

Wheatgrass is medically beneficial when treating the side effects of cancer and is also helpful for the streamlined digestion of food.

Wheatgrass includes enzymes that help in the faster absorption of nutrients and breaking down the meal with efficiency.

Wheatgrass contains a rich nutritional value and boasts an array of therapeutic properties, which would be healthful for anyone trying to sustain a healthy diet while undergoing integrative cancer treatment.

Wheatgrass is composed of nutritious minerals and vitamins because of which it is a rich source to improve your overall health.

It is antibacterial, anti-inflammatory, and a prodigious antioxidant. It comprises several components that include calcium, magnesium, iron, enzymes, chlorophyll, 17 amino acids, phytonutrients, as-well-as vitamins A, C, E, K, and B Complex.

Wheatgrass helps the body get rid of harmful toxins, along with boosting your energy levels to feel revitalized and lively. Considering that cancer treatments take a toll on the body, you can seek help from this ayurvedic plant.

Wheatgrass juice is beneficial to enhance your metabolism when undergoing cancer treatment. Wheatgrass also does not contain any calories and is, therefore, a healthy food item to mitigate food cravings.

Numerous scientific studies have proven that wheatgrass for cancer treatment is considered as one of the beneficial natural remedies to alleviate the side-effects of chemotherapy.

Regular consumption of organic food can protect your children and family from cancer-inducing pesticides. It also helps eliminate the middlemen, which can provide farmers to sustain a decent livelihood.