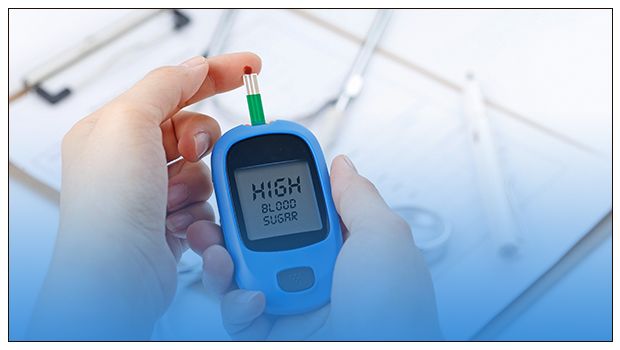 Diabetes is a chronic disease in which blood sugar levels are elevated and are not properly regulated. When carbohydrate-containing food is consumed, the carbohydrate is broken down into glucose. Glucose is taken up by blood and transported to other tissues. Insulin is the hormone that regulates blood sugar levels.

Pancreas secretes insulin and if it does not produce sufficient insulin or the body is unable to use the insulin secreted efficiently, the blood sugar levels become high. This condition is called hyperglycaemia which is the result of uncontrolled diabetes (1).

There are 3 types of diabetes

A doctor may prescribe blood and urine tests if there are symptoms of diabetes.

Blood and urine tests to check if a person has diabetes

The plasma glucose test is done after about 8 hours of fasting, that is not having any food, and glucose in the blood is measured. Except for water nothing should be taken. A fasting blood glucose level of 99 mg /dL is normal and 100 10 125 mg/dL is prediabetic stage and above 125 ml/dL is confirmed as diabetes (2, 3).

This is a test which measures the average blood sugar level for the past 2 to 3 months. The doctors will come to know in general how controlled the glucose level is in that person. Below 5.7 % A1C is considered to be normal, between 5.7 to 6.4 % show that the person is in prediabetic stage and above 6.5 % indicates that the person has diabetes (3).

The GTT measures blood sugar level before and after a person drinks a beverage that has glucose in it. The test is conducted on a person who has fasted overnight and blood is drawn to measure fasting glucose levels. The person is then given the drink containing glucose and the glucose levels are measured after 1, 2 and 3 hours.

This test measures your blood sugar at any time if the doctor suspects diabetes. You can take this test at any time and don’t need to fast (not eat) first. A blood sugar level of 200 mg/dL or higher indicates you have diabetes.

Later glucose tolerance test is conducted. The pregnant woman is asked to fast overnight and will be given a drink with higher levels of glucose than in the initial test and the blood glucose level is determined every hour for 3 hours. If any two readings are above normal levels the pregnant woman will be diagnosed with gestational diabetes (4).

Normally there should be no glucose present in urine. If the doctor asks for checking glucose in urine and if it comes positive that means the person has diabetes. It is also called glucosuria test (5).

These tests are done to test if the doctor suspects diabetes. If the person is in the prediabetic stage he/she can take care to prevent advancing to diabetes. A regular check-up is done for diabetics and these same tests are conducted to see if the glucose levels are in control to avoid any complications.