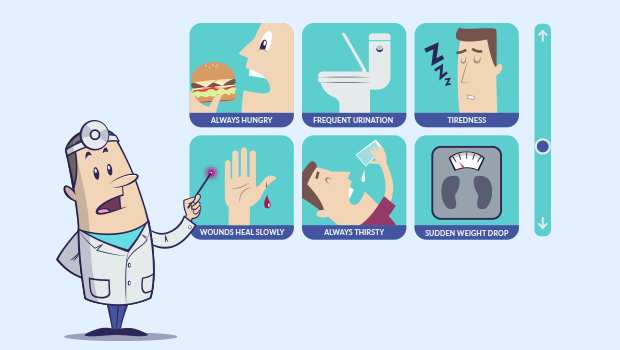 Early and Advanced Symptoms of Diabetes

What is diabetes and what are the early symptoms of diabetes?

Diabetes is a chronic disease in which blood sugar levels are not regulated the way they should be. When food is consumed, carbohydrate is broken down into glucose. The glucose is taken up by blood and transported to other tissues. Pancreas releases insulin hormone which regulates blood sugar levels. irregular functioning of which can be early symptoms of diabetes.

If pancreas does not produce sufficient insulin or the body is unable to use the insulin released by pancreas efficiently the blood sugar levels become elevated. This condition is called hyperglycaemia which is the result of uncontrolled diabetes. Identifying the early symptoms of diabetes is crucial. If this condition continues over a long period of time it may cause harm to other organs of the body such as heart, kidneys and eyes (1, 2).

Here are the common early symptoms of diabetes

Early symptoms of diabetes may be less pronounced in type 2 diabetes so much so that the affected person may not realize that diabetes is creeping up on him/her slowly for some years.

Elevated levels of blood glucose for a long period of time lead to several complications in the body. This means one has crossed over the stage for early symptoms of diabetes. These symptoms are microvascular and macrovascular complications. These complications are chronic in nature (5).

Unless regularly monitored by the doctor CKD cannot be detected. If detected early and treated the result will be better.

Diabetic retinopathy as it is called can occur in both T1D and T2D. The micro vessel that supply blood to the retina of the eye is affected. Diabetic retinopathy is associated with hyperglycaemia which prevents the cells of retina from getting oxygen (5).

Vison may be permanently impaired if the retinopathy is not caught early and treated (6). Herein lies the importance of recognizing the early symptoms of diabetes.

Nerve damage occurs when one has overlooked the early symptoms of diabetes. This complication is also called diabetic neuropathy. Legs and feet are affected most commonly because of the nerve damage (6).

Diabetes over a period of time may reduce the blood supply to the foot. The high blood glucose levels damage the nerves. It may also begin to gradually affect the nerves which transport nerve impulses to legs.

Because it affects the feet more often it is also called diabetic peripheral neuropathy. The symptoms include decreased or no sweating, numbness, burning sensation, weakness and loss of reflexes in the legs and feet (5).

People with diabetes are at a higher risk of suffering from heart diseases and getting a stroke (6).

Diabetic acidosis is another complication of long-standing diabetes and it is acute in nature. Overlooking the early symptoms of diabetes can lead to a serious complication when the body produces increased levels of ketones.

When there is less insulin in the system glucose cannot be utilized by the body. Body instead starts using fat as the source of energy and during this process there may be an accumulation of acids known as ketones in the blood.

If this condition is not caught and treated on time it may lead to diabetic ketoacidosis which may have very serious implications (7). Ketoacidosis if untreated can result in loss of consciousness or it may even be fatal.

If someone has diabetes it is imperative to manage blood glucose levels so that it does not lead to any of the complications. Awareness about early symptoms of diabetes can help detect and treat diabetes and prevent the onset of advanced signs which are serious complications of uncontrolled diabetes.