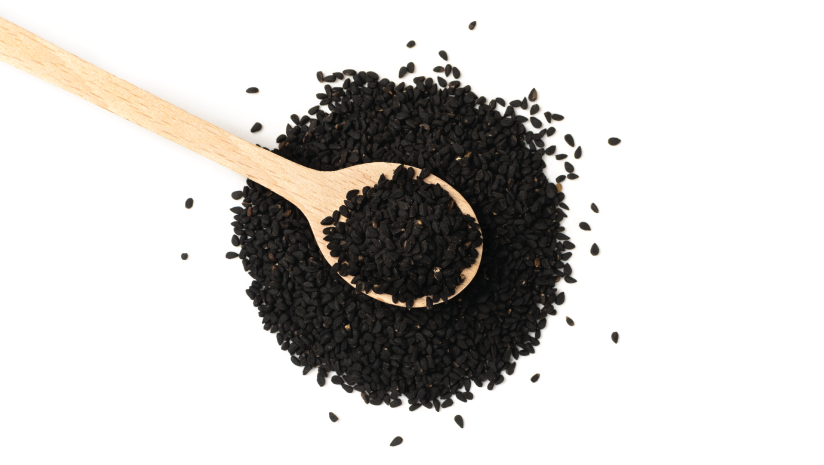 Due to its distinct aroma, black cumin seeds are commonly used as a spice in the preparation of many delicacies. However, the traditional use of black jeera spanned many medical arenas for the treatment of a variety of diseases. It is believed that black cumin seeds are rich in bioactive constituents including terpenes, flavonoids and phenols. Today, many trials in the medical field have dedicated their findings to the efficacy of black cumin, owing to the main component, thymoquinone, which is believed to deliver black jeera benefit.

The following table depicts the composition of black cumin seeds:

Meals in India are prepared using kalonji which brings a zestful flavour to curries and vegetables. Besides the nutrients mentioned above, black jeera benefit is also derived from the presence of trace elements, amino acids, vitamins, potassium and calcium among a host of other prominent constituents. To obtain the maximum benefit of black cumin, the use of organic options is recommended. Since they are produced without the use of chemicals and pesticides, they remain safe for consumption for your family.

Let us explore the health benefit of black cumin seeds.

Black Jeera Benefit: Is It Good For Your Health?

Helps To Keep A Check On Diabetes Level

Black jeera, also known as kalonji, displays a positive impact on those with high levels of diabetes. Consuming black jeera seeds can play a remarkable role when it comes to managing the levels of sugar in the body. This black jeera benefit is mainly attributable to flavonoids, which are found in abundance in black cumin.

The effects of black jeera benefit extend to help the memory by boosting the overall capacity. With long term use, a significant increase can be observed in the levels of brain serotonin which in turn helps to enhance the ability to learn and improves memory. Consequently, it can also help to manage levels of anxiety.

Reduces The Growth Of Bacteria

In the human body, a number of disease-causing bacteria are responsible for causing long term infections. Several studies have found that black cumin seeds can inhibit the growth of such bacteria in the body and treat conditions which may result due to their presence. Thus, the regular consumption of kalonji may be useful to keep bacterial infections at bay.

Chronic inflammation may result in a number of diseases such as cancer and heart conditions. The unique constituents of black cumin seeds are responsible for an anti-inflammatory effect on the body, which protects vital cells through radical scavenging. As the molecular targets of these constituents interact with the cells in the body, the impact of inflammation is seen to be reduced.

Provides Protection To The Liver

The function of the liver in the body is a vital one, and it is important to ensure minimum damage to it. Due to the high level of antioxidant content in it, black cumin seeds have shown a remarkable difference in the health of liver function, indicating that it is of use to protect the liver against damage and injury.

Prevents The Incidence Of Ulcers In The Stomach

Stomach ulcers result from the action of acids which eat away the mucus layer of the stomach. The impact of black jeera benefit has been studied in the context of protecting the lining of the stomach. As a result, it prevents the formation of ulcers and may even help in treating ulcers which are already present in the stomach.

Helps To Fight Off Cancer

The context of black jeera benefit has also been studied for the treatment of cancer. The constituents of black jeera seeds exert an anti-oxidant, cytotoxic and anti-metastatic effect in various primary cancer cells. As a result, it has been found that back jeera can aid in neutralising free radicals which can potentially lead to the development of cancer in the body. This benefit can also be attributed to the presence of a high level of antioxidants in the seeds.

The Black Jeera Benefit In Your Kitchen

If you are looking to consume black jeera seeds on a regular basis, it may not be a difficult thing to achieve. There are many ways in which you can add organic black cumin seeds to your diet.

Eat them raw or add them to a dish for tempering with oil; it is a great idea to consume these seeds for a balanced and vivid diet consumption.

Today, the recognition of unique compounds in black cumin seeds has assured scientists of its viability as a medicinal ingredient. To make the most of your diet with black cumin seeds, ensure that you consume only organic seeds, which are safe for your health and better for the environment as well.