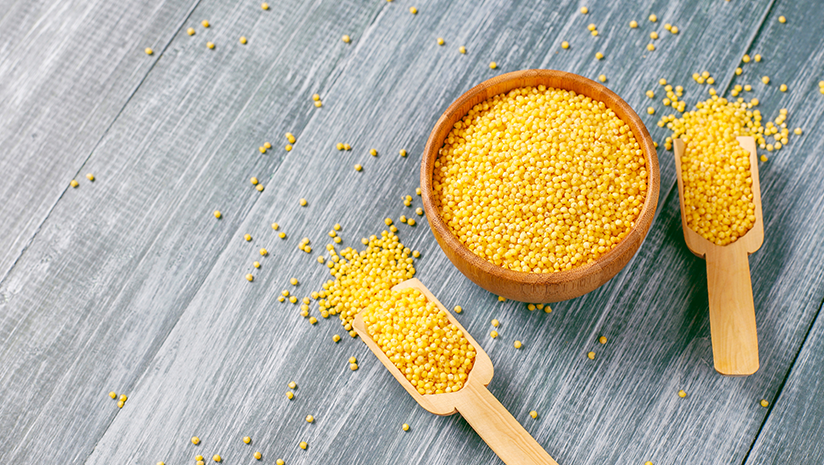 Nutritional and Health Benefits of Millets

Millets are a group of variable small-seeded grasses, extensively cultivated as cereal crops or grains, to serve the purpose of fodder and human food. Millets do not form a taxonomic group, but a functional or agronomic one.

When consuming any food substances, be it millets or other cereals, go for organic food as it increases the millet nutritional value and induces other physiological benefits such as –

The most commonly cultivated millet is the pearl millet. Often locally called ‘Bajra,’ it is a notable crop with extensive cultivation in India.

Millets are nutritionally analogous to leading cereals and serve as an excellent source of protein and other micro-nutrients.

While sorghum and most of the millets comprise about 10% protein and 3.5% lipids, finger millet contains 12-16% protein as-well-as 2-5% lipids.

Sorghum and millets are rich sources of micro-nutrients that include vitamins and minerals.

Millets have fewer cross-linked prolamins, which act as an additional factor contributing to a higher digestibility of millet proteins.

The millet nutritional value chart consists of rich nutrients in the form of carbohydrates, starch, dietary fibre, and many more that help in the vital functioning of the human body (Source).

It also contains data on the bajra nutritional value, which gets consumed extensively in India.

Pearl millet or bajra is a high-energy cereal that comprises carbohydrates, protein, fats, vitamins B and A, calcium, zinc, iron, and also contains potassium, magnesium, phosphorus, copper, and manganese.

The bajra nutritional value per 100g is –

You must prefer organic foods for daily consumption as they adhere to international standards of healthy meals. Organic farming contributes towards protecting the environment as it is eco-friendly.

Foxtail millet is an everyday food in parts of India. Millet produced a significant fall (70%) in blood glucose in diabetic rats according to research.

The competence of insulin and glucose receptors in the body increases by the significant levels of magnesium content prevalent in millets and help prevent diabetes.

Finger millet-based diets have demonstrated a lower glycemic response because of richness in fibre, and also alpha-amylase inhibition characteristics, which reduce starch digestibility and absorption (Source).

People in India typically use sprouted grains as weaning foods for infants or as easily-digested foods for the elderly.

Many antioxidants found in millets can neutralize the free radicals that lead to cancer and dispose of other toxins from the body, especially in the kidney and liver.

Quercetin, curcumin, ellagic acid and other beneficial catechins can help rid the system of any foreign agents and toxins by facilitating proper excretion and neutralizing enzymatic activity in those organs.

Millets are rich sources of magnesium that help in alleviating blood pressure and the risk of heart strokes, especially in atherosclerosis.

The potassium found in millets keeps blood pressure low by functioning as a vasodilator and mitigating cardiovascular risk.

The plant lignans prevalent in millets can convert into animal lignans in the presence of microflora in the human digestive system and safeguard against heart disease.

The high fibre content in millets is pivotal in lowering cholesterol, eliminating LDL from the system and boosting the effects of HDL.

The fibre content in millets eliminates disorders such as constipation, excess gas, cramping, and bloating.

Millets also shield you from an immune-mediated enteropathic disease called celiac that gets triggered by the ingestion of gluten in vulnerable individuals.

As millets are gluten-free, they have prolific potential in foods and beverages and can satisfy the rising demand for gluten-free foods and are suitable for individuals with celiac disease.

With so many benefits offered by millets, you must consume them in adequate amounts as per the nutritional chart to avail optimum benefits.

Daily consumption of organic food can safeguard your children and family from cancer-inducing pesticides. It can also help small farmers eliminate the middlemen to generate sustainable livelihoods.

Studies on the millet nutritional value suggest that millets act as antioxidants, detoxifying agents, immune modulators, and many other forms.

Millets can defend against age-related degenerative diseases, some of them being cardiovascular diseases (CVD), cancer, diabetes, and many more.