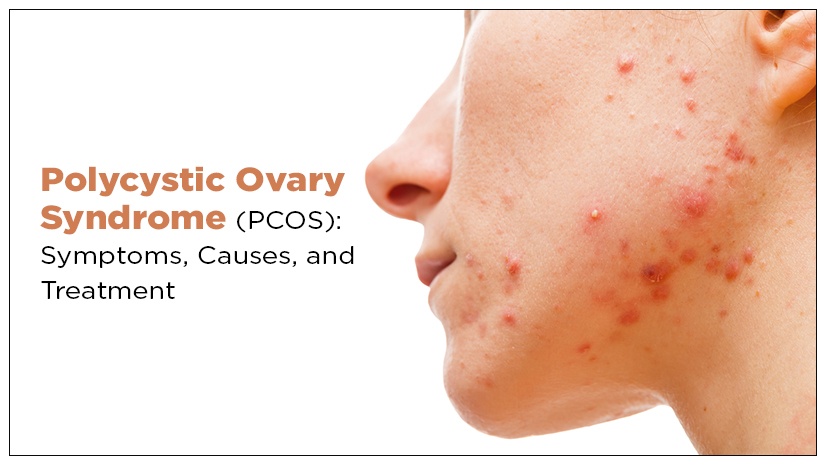 Polycystic ovary syndrome (PCOS) is a common disorder that affects how a woman’s ovaries work (1). It is associated with a set of symptoms caused by hormonal imbalance which afflict women and girls of reproductive age  and hence it’s important to know the pcos symptoms(2).

What happens in PCOS?

Polycystic ovary syndrome occurs when the ovaries or adrenal glands produce increased amounts of male hormones than normal, one of the major pcos symptoms. This condition may lead to the growth of cysts on the ovaries. PCOS is seen more in women who are obese (1).

PCOS is one of the major reasons for anovulatory infertility, that is absence of release of mature egg by the ovary every month (2). Most women come to know they have PCOS or observe any pcos symptoms only when they visit a doctor because they are unable to get pregnant.

The definitive reason for PCOS is not known but it is generally thought to be because of hormonal imbalance or other pcos symptoms.

Pancreas produces insulin hormone which regulates the sugar levels in blood. It is because of insulin the glucose in blood enters cells where it is used to produce energy. Insulin resistance is a condition when the cells do not respond to insulin the way they should and glucose does not move into cells as it should (3).

Pancreas starts producing even more insulin in response to higher levels of blood glucose levels. Because of high levels of insulin produced the ovaries produce higher levels of testosterone which prevents normal ovulation.

Ovaries produce a hormone called estrogen which is also called “female sex hormone” and ovaries also produce androgens which are also called “male hormones”.  Ovaries synthesize more of estrogen and less of androgen. It is very important for these hormone levels to be maintained so that body performs its roles normally unlike when showing pcos symptoms.

It has been observed that PCOS runs in the family and it is possible that if the mother has the daughter may get PCOS (3). The specific genes responsible for pcos symptoms have not yet been identified.

It is possible that a person with PCOS may show a range of pcos symptoms or just one symptom.

Lifestyle changes such as weight loss diet and diet which decreases insulin resistance and increased physical activity may help.

Weight loss even by 5 % may show some improvement in pcos symptoms. Therefore, dietary modification and increased physical activity may be suggested by doctor to treat PCOS (3). Obesity is one of the common factors seen in women with PCOS (5).

Depending on individual cases the doctor may prescribe medicines to regularise periods, to overcome infertility problems, to reduce insulin resistance and manage other issues. Sometimes other methods of treatments such as minor surgery also may be undertaken. Your doctor will decide which treatment is the best for you (3).