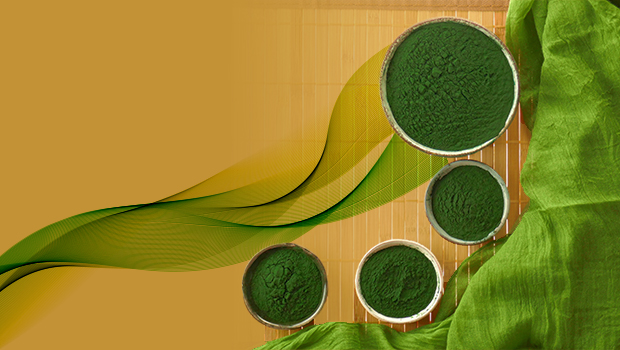 Spirulina or Arthospira platensis is a blue-green alga. Its name is derived from the spiral nature of its filaments. It is a microscopic cyanobacterium which was thought to have the property of photosynthesis before any other organism and that higher plants evolved from it (1, 2).

Spirulina generally refers to the dried biomass of Arthrospira platensis which grows in fresh, salt and brackish water bodies. Spirulina grows well in alkaline pH of 10 – 12.   Spirulina became very popular after it was used by NASA as dietary supplement for astronauts effectively. It is found naturally in lakes and because of its popularity it is grown commercially also. The sunny climate of countries such as India, Greece, Japan, United States and Spain are conducive for the growth of spirulina (1, 2).

Spirulina has been used as food from ancient times. It is commonly consumed in Chad and surrounding countries in Africa even now. Spirulina was the sole source of nutrition in some African communities in times of famine (3).

Spirulina is available in the form of tablets and health drinks and is sold as dietary supplement without any significant side effects. US FDA has put it under Generally Recognized as Safe list as there is evidence of its safety (1).

Spirulina is a food that is good to humans as well as the earth (4). It can grow in shallow ponds and has the ability to double its biomass in 2 to 5 days.

NASA has stated that the nutritional value of 1000 kg of fruits and vegetables equals one kg of spirulina. European space agency and United Nations have observed that spirulina is a source of several nutrients. Because of its valuable constituent’s spirulina confers certain nutritional and health benefits and therefore it is made available in several forms such as powders, tablets, flakes, syrups (5). Spirulina is being sold as a food supplement and is also added as an active ingredient in many functional foods and beverages (3).

Spirulina is a rich source of protein; dry spirulina contains 58 % protein (6). It also contains all the essential amino acids and the protein digestibility is also high (3). Spirulina is a source of several vitamins, minerals and trace elements. It is a rich source of beta carotene (precursor of vitamin A) and B vitamins especially vitamin B 12. It is also a good source of iron. Spirulina also provides γ-linolenic acid which is an essential fatty acid (3).

Spirulina has more calcium compared to milk or tofu and more beta carotene when compared to carrots and spinach (2).

In a review of literature, it was observed that spirulina has LDL cholesterol and triglyceride lowering effect which is beneficial for heart health. It was also seen that HDL (good) cholesterol level increased while taking spirulina (1, 2). Spirulina has inhibitory effect on atherosclerosis (2).

Spirulina had a beneficial effect on controlling blood glucose levels and improving the lipid profile of people with type 2 diabetes (7). Dyslipidemia and oxidative and inflammatory stress are said to contribute towards onset of diabetes spirulina will have positive effect in management of type 2 diabetes. The reason being spirulina has improving effect on lipid profile and is a rich source of antioxidants (5).

Antioxidants reduce the risk of degenerative chronic diseases by reducing the harm caused by free radicals. Spirulina is a rich source of beta carotene and tocopherol which are potent natural antioxidants (2). The presence of two phycobiliproteins: phycocyanin and allophycocyanin also contributes towards antioxidant activity (8).

The anticarcinogenic effect of spirulina may be because of the antioxidant property exhibited by beta carotene and superoxide dismutase (2). There is evidence that spirulina and spirulina extracts have antitumor and anticancer functions (3, 8).

Being a good source of iron spirulina can help reducing the risk of anaemia. The bioavailability of iron from it is also high (4).  It was also observed that spirulina may increase red blood cell production (2). Spirulina provides chlorophyll which is very similar in structure to haemoglobin (4).

There is well supported evidence that spirulina demonstrates anti-inflammatory properties by inhibiting the release of histamine from mast cells (1, 2).

Spirulina is observed to have antiviral, anti-fungal and antibacterial activities (8). Spirulina has protective effect against microbial infections.

With so many benefits to offer no wonder some call spirulina a super food. It is a dietary supplement which can help us to prevent nutritional deficiencies as well as cut down the risk of chronic life style diseases which are increasing at an alarming rate.