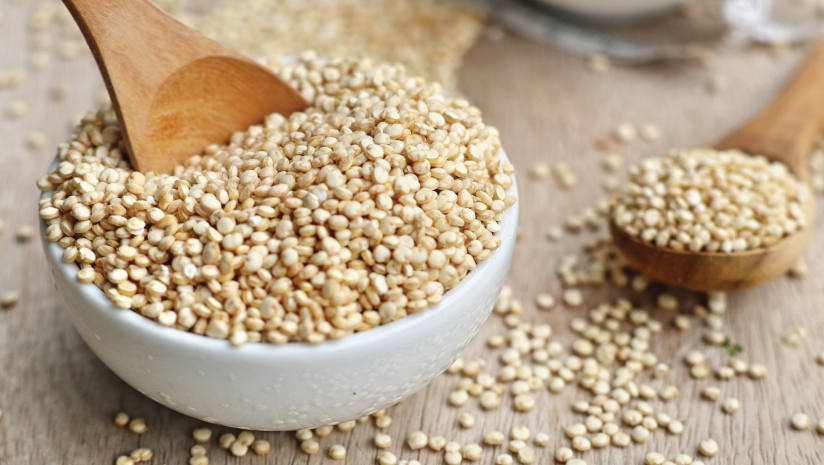 Quinoa is a highly versatile food item. You can add it to your salad, use it to bulk up soup, turn it into porridge, or simply substitute it for rice. Considering all the buzz surrounding this superfood, you may have already gotten a pack or two to try it out. But have you ever wondered about quinoa’s nutrition value?

Consider this blog post as your Quinoa 101 guide as we walk you through the quinoa nutrition value, its health benefits, and some fascinating facts!

Here is a detailed breakdown of the quinoa nutrition value (100 grams, cooked):

Health and Nutritional Benefits of Quinoa

A quick glance through quinoa nutrition value is enough to outline its various health benefits. Regardless, here is an overview of the same:

Now that you are well aware of quinoa’s nutrition value and its health benefits, it is time to move on to some fun and interesting facts about the superfood!

What Do You Call it Again?

Quinoa sure may sound like a strange, alien name when you read it. However, its pronunciation is fairly simple – Keen-wah!

Quinoa finds its origin in South America, along the Andes, where it has been eaten for thousands of years. The plant Chenopodium quinoa is native to Peru and is also widely cultivated in Chile and Bolivia.

Quinoa is Not a Grain!

Yes! If you go into the scientific technicalities, quinoa is actually a protein-rich seed that is derived from plants that are closely related to spinach, beets, and Swiss chards!

It Has a Rich History

Quinoa was a staple in the Inca Empire, and it is believed that the name “quinoa” translates to mother of all grains. It was believed to be a sacred grain.

Incan warriors would consume balls containing quinoa and fats to keep them fuelled through battles and long marches. Ancient healers also used quinoa plasters to heal bones and fractures. Chicha, a traditional Andean beer, is brewed from fermented quinoa and consumed even to this day.

It is a Complete Protein

A 1955 publication titled “Nutritive Values of Crops, Nutrient Content and Protein Quality of Quinua and Cañihua, Edible Seed Products of the Andes Mountains” dubbed quinoa as a complete protein for its amino acid profile.

It has MANY Varieties

As per the Whole Grains Council, there are about 120 known variants of quinoa, with red, black, and white as the most commercially available ones. Accordingly, quinoa nutrition value and taste also vary depending on the type. Yellow and white quinoa have milder tastes, while red and black quinoa has a more earthy flavour. You may even come across purple, pink, and orange quinoa!

It Is One of the Fastest Cooking Whole Grain

You Should Wash Quinoa Before Cooking

The outermost layer of quinoa contains a bitter residue, called saponin. Saponin is an organic compound that protects it from birds and insects. Hence, you must wash quinoa thoroughly in water to remove this layer. Additionally, quinoa seeds may also be coated in chemical pesticides and insecticides if you are not using organic quinoa. You can easily bypass these troubles by switching to organic quinoa instead.

It Grows in Varied Climates

Quinoa is a robust crop that thrives in various climatic conditions. It is drought-resistant and can grow in adverse conditions such as high altitude, low rainfall, poor soil condition, temperature extremes (both hot and cold). For this reason, NASA has proposed quinoa cultivation in space!

We have seen quinoa nutrition value, its health benefits, and various facts. We have also seen how organic quinoa is better and more nutritious than regular quinoa. So how about cooking it up and enjoying it now?