Effects of diabetes on the body | 24 Mantra Organic

Effects of diabetes on the body 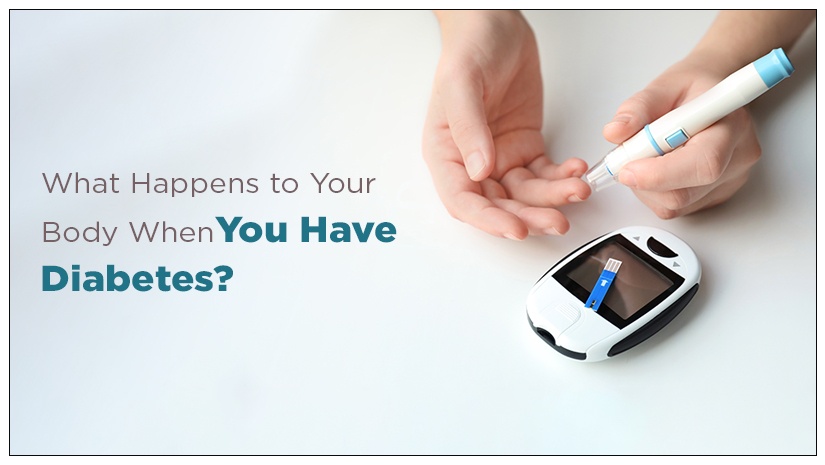 What Happens to Your Body When You Have Diabetes?

Diabetes is a chronic disease in which blood sugar levels are elevated and are not properly regulated. When carbohydrate-containing food is consumed, the carbohydrate is broken down into glucose effects of diabetes on the body start to show. Glucose is taken up by blood and transported to other tissues. Insulin is the hormone that regulates blood sugar levels.

Pancreas secretes insulin and if it does not produce sufficient insulin or the body is unable to use the insulin secreted efficiently, the blood sugar levels become high. This condition is called hyperglycaemia which is the result of uncontrolled diabetes with effects of diabetes on the body (1).

What are the effects of diabetes on the body?

Polyuria is a condition where a person urinates more frequently than normal and in large amounts often at night. This is one of the main and early symptoms of diabetes.

It is also commonly seen in people with diabetes. It is a feeling of extreme thirst which may be accompanied by a feeling of dryness in the mouth.

Extreme hunger is one of the effects of diabetes on the body.  When the blood glucose levels are high the cells in various tissues do not get enough glucose. The cells without the supply of sufficient glucose cannot produce energy. Since the body perceives lack of energy, hunger pangs are initiated.

Because of hunger even after having meals a person may become irritable.

Another conspicuous change in the body of the person with diabetes is unexplained weight loss. That is weight loss without any change in diet or physical activity. Since glucose is not utilized by the cells efficiently fat stored in the body is used for energy which results in weight loss.

There is less energy produced by cells because the cells do not get enough glucose, a person may start feeling lethargic, tired and weak.

Decreased and blurry vision may be one of the problems faced by diabetic people. Hyperglycaemia or high glucose levels may affect eyes and cause vision issues. It may lead to diabetic retinopathy as high blood sugar levels affect the cornea and retina (5).

The micro vessel that supplies blood to the retina of the eye is affected. Diabetic retinopathy is associated with hyperglycaemia which prevents the cells of retina from getting oxygen (7). Vison may be permanently impaired if the retinopathy is not caught early and treated (6).

Nerve damage is another common sign of uncontrolled diabetes. This complication is also called diabetic neuropathy. Legs and feet are affected mostly because of the nerve damage (6).

The effects of diabetes on the body over a period of time may reduce the blood supply to the feet. The high blood glucose levels damage the nerves. It may also begin to gradually affect the nerves which transport nerve impulses to legs.

Because it affects the feet more often it is also called diabetic peripheral neuropathy. The symptoms include decreased or no sweating, numbness, burning sensation, weakness and loss of reflexes in the legs and feet (7).

People with diabetes are at a higher risk of suffering from heart diseases and getting a stroke (6).

Diabetic acidosis is another complication of long-standing diabetes and it is acute in nature. It is a serious complication when the body produces increased levels of ketones.

When there is less insulin in the system glucose cannot be utilized by the body. Body instead starts using fat as the source of energy and during this process there may be an accumulation of acids known as ketones in the blood.

If this condition is not caught and treated on time it may lead to diabetic ketoacidosis which may have very serious implications (8).

A final word on the effects of diabetes on the body

The above conditions may be seen in people with uncontrolled diabetes. If a person has diabetes it is extremely important to be aware of the changes that are happening to one’s body and make sure that blood glucose levels are managed.

Awareness about what happens to your body when you have diabetes will help to catch diabetes early and avoid complications.

6.Centers for Disease Control and prevention (2017). Putting the Brakes on Diabetes Complications