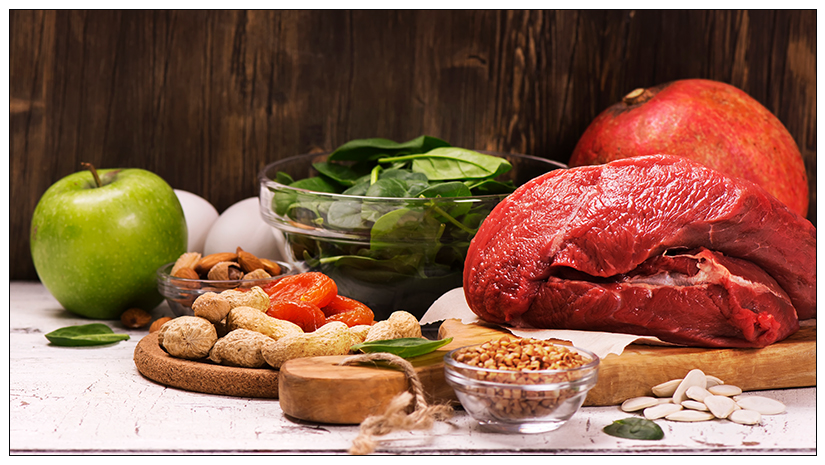 Iron is one of the most important minerals found in the body. Though there is less than 5 grams which is as much as a teaspoon of iron in the whole body, the role it plays is very important.  Most of it is found in haemoglobin in the form of heme which is found only in animals and not in plants.

Role of iron in the body

Iron plays an important role in aerobic energy production of ATP molecules. Iron also exhibits the property of antioxidant apart from being an essential part of the immune system.

Dietary iron occurs in two forms in foods, heme and non-heme iron. The primary sources of heme iron are haemoglobin and myoglobin from animal sources such as meat, poultry, and fish. Heme is part of haemoglobin in red blood cells and in muscles, it is part of myoglobin.

Animal foods contain both heme and non-heme iron and are good sources of heme iron.

Most non-heme iron is from plant sources like cereals, pulses, legumes, fruits, and vegetables. Non-heme iron is the primary source of iron for humans.

Some foods such as breakfast cereals are fortified with iron.

Absorption of heme and non-heme iron

Iron bioavailability was found to be in the range of 14–18% for mixed diets and 5–12% for vegetarian diets in subjects with no iron stores in a study conducted.

The principal inhibitors of iron absorption are

Vitamin C or ascorbic acid when taken along with plant foods rich in iron the non-heme iron absorption is increased. Add lime juice over plant foods to decrease the pH. Squeeze a lime when you take green leafy veggies next time!

Do not consume tea just before or after a meal containing iron-rich foods because it contains polyphenols which inhibit non-heme iron absorption.

Consumption of a diet deficient in iron over a long period of leads to low levels of haemoglobin in blood which leads to the condition called anaemia.

When the haemoglobin levels are low there is a decrease in the oxygen binding and transporting capacity of the blood. Anaemic people feel lethargic and get tired very fast.

Low levels of iron in the body also affect our protective and immune functions.