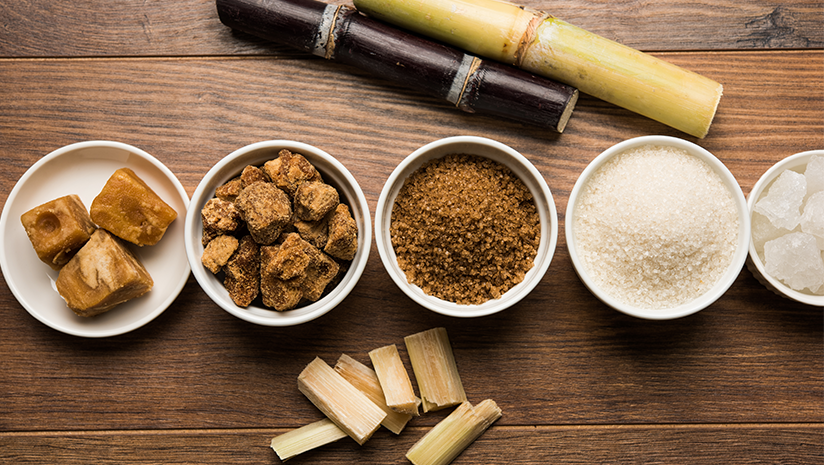 Know the Difference Between Jaggery, Brown Sugar, Molasses, and Sugar

To have or not to have, is that the question? White sugar is bad for health, but what about brown sugar? What’s the difference between jaggery and brown sugar? What are molasses? Is brown sugar better than jaggery? Between brown sugar, molasses, jaggery, and white sugar, which is better? While we are at it, we’ll also look at their nutritional values so that you can make an informed decision and lead a healthy lifestyle.

That being said, the positives of organic jaggery and brown sugar is a whole different ball game altogether due to the absence of harmful chemical compounds.

Difference Between White vs. Brown Sugar

There are around ten types of sugar available in the market. Despite that, sugar is sugar and is considered slow poison. Manufactured from the same plant – sugarcane or beet sugar – the processing and level of refining define the colour of the sugar. When the sugarcane juice is being processed, it produces a thick, brown-coloured juice that is called molasses [1].

When the molasses is separated from sugar and refined, the result is white sugar. When molasses are added to the sugar during processing, it becomes brown sugar. The quantity of molasses and the level of processing are the two main things that define brown sugar’s colour and texture.

Like sugar, jaggery is also made from sugarcane and is often called unrefined sugar. That’s because it is manufactured without separating the molasses. Once the sugarcane juice is extracted and filtered, it is cooked for a while until the mixture becomes a thick, sticky brown paste. This paste is then poured in moulds and kept aside to cool [2].

The colour of jaggery varies from light, golden brown to dark brown due to the type of sugarcane and the juice in it. Because of its colour, it is often confused with brown sugar. But there are several common differences between jaggery and brown sugar, some of which we will explore here.

Before we dive into the key difference between jaggery and brown sugar, let us look at the nutritional value of jaggery and see why it is often considered a healthy replacement of any form of sugar.

Difference Between Jaggery and Brown Sugar

The most obvious difference between jaggery and brown sugar is the way these two sweeteners are manufactured. Brown sugar is made by mixing refined sugar and a controlled amount of molasses. The molasses in the brown sugar gives it a toffee-like flavour and colour. This type of sugar is often used to make dense cakes, cookie dough, and barbecue sauces.

Jaggery, on the other hand, is made by sugarcane juice or palm sap. The sugarcane juice is reduced to a thick brown paste before being set in moulds to harden. Jaggery is browner in colour and has loads of flavours since it is unrefined. The predominant flavours of jaggery are fruity, earthy, caramel with slight notes of smoke.

Another difference between jaggery and brown sugar is the nutritional value. Even though the two have almost similar calorie value, jaggery has a noticeable amount of iron and other essential minerals. The mineral content makes jaggery healthier for people trying to reduce empty calories from brown or white sugar.

One can argue that the molasses in brown sugar makes it a source of certain minerals like calcium, potassium, iron, and magnesium. However, these minerals are present in almost insignificant amounts, providing no real benefits. Despite that, brown sugar is comparatively better than white sugar since white sugar contains no minerals and also risks having sulfur, which is harmful to the human body but is still used during the refining process.

If you want to adopt a healthy lifestyle, the first step has to be a cut in your sugar intake. Regardless of whether you are having white or brown sugar, they are both empty calories which do more harm than good. That is why jaggery has emerged as a healthier option since it is less sweet and has more nutritional value. The biggest difference between jaggery and brown sugar is the nutritional value and its taste. Even though both jaggery and brown sugar have molasses, brown sugar contains an insignificant amount of minerals and vitamins and has a high glycaemic index.

So, if you are on a weight loss diet or are planning to start one, the good news is that you can have jaggery in small amounts. Jaggery is also suitable for diabetic patients when consumed in moderation as it also increases blood sugar levels.

The next time you have a sugar craving, try 24 Mantra Organic’s Jaggery Powder and enjoy the benefits of organic food.