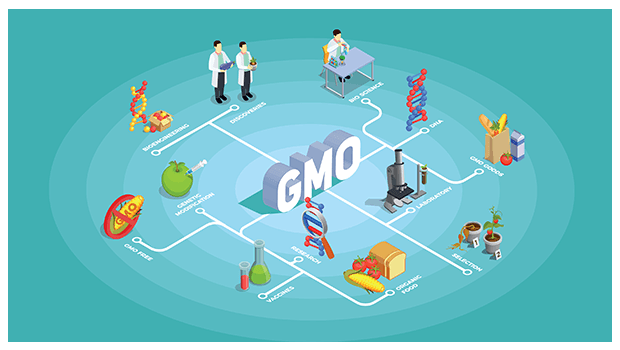 HOW IS GMO HARMFUL FOR YOUR HEALTH?

A genetically modified organism (GMO) is one whose genetic structure has been redesigned and modified through the insertion of other desirable genes in them.  Crops and livestock that are grown via genetic engineering are known as GM foods. Such scientific procedures are executed in order to introduce some improvements to the existing fruits and celery. However these forcible changes lead to negative impacts for the human health in long term and also raise environmental concerns.

Increased use of herbicide: GM vegetables are usually herbicide tolerant. This becomes an incentive for the farmers to spray higher amounts of herbicide on the crops during farming. Excessive spraying leads to the formation of ‘superweeds’ which cannot be eliminated by the herbicide. As a result GM products contain larger residues of herbicide and other chemicals. GM crops are supposed to be an improved and better version of their natural counterpart but the genetic interference invariably paves the way for further ills.

Genetic mixing leads to unpredictable ills: When a foreign DNA is inserted into crops, the resulting modification can give rise to new allergens and toxins. In an attempt to control one kind of problem in the crop, the GMO is added. However this intermixing often gives birth to other new sources of ailments and deficiencies. Needless to say there is massive collateral damage in the form of new allergens, toxins and carcinogen.

A threat to biodiversity: The over usage of synthetic herbicides and other hazardous chemicals leads to soil and water pollution. The soil is depleted of its natural nutrients and instead accumulates such harmful pest-killing toxins over time. The genetic manipulation within the vegetables, fruits and livestock is highly unnatural and this disturbs the ecological balance. Certain soil organisms that render health nutrients to the crops organically are replaced and washed off by the toxic flood of chemicals.

Seat of various disorders: In 2009 the American Academy of Environmental Medicine (AAEM) issued a statement directing the physicians to advise their patients about steering clear of GM foods. The statement went on to include the physiological ramifications of GMO consumption. These include organ damage, gastrointestinal and immune system disorders, accelerated aging and infertility. Many other scientific research centres have since then reported about the detrimental effects of consuming GM foods.

Bacillus thuringiensis: According to studies, GM crops such as soybean, cotton seeds and corn have shown two predominant traits – insecticide resistance and herbicide tolerance. This implies that the plants grown through genetic engineering are capable of surviving the toxic chemicals and have imbibed the toxic trait of Bt or Bacillus thuringiensis. Bt belongs to the bacterium species that causes anthrax and food poisoning. Thus one can clearly assess the harmful effects of GMO.

In lieu of the GMO food products, human health can be sustained through the consumption of organic foods. As opposed to GMO, organic foods are cultivated via natural practices such as crop rotation, mulching, usage of green manures, etc. Unlike GMO, they are not a threat to the human body or environment.