Why include Organic Wheatgrass Powder in your diet - 24 Mantra Organic

Why include Organic Wheatgrass Powder in your diet - 24 Mantra Organic 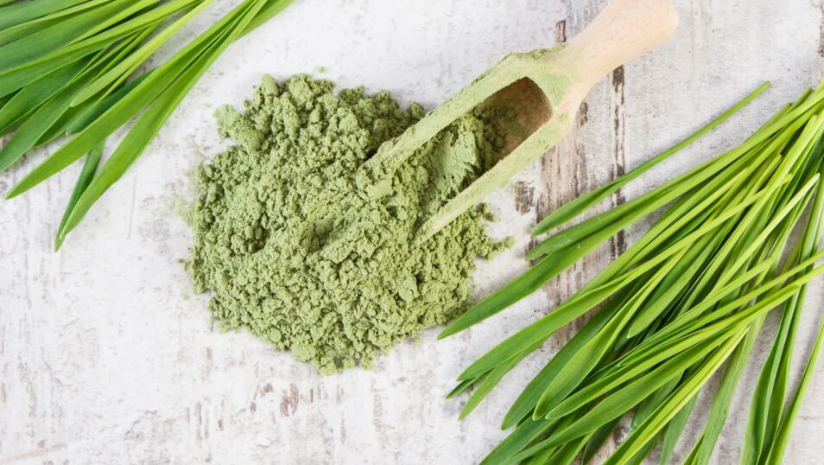 Wheatgrass, as the name suggests, is the young grass of a wheat plant. Bright green in color, it is a thick, dry grass that resembles straw or hay. Many farmers grow wheatgrass to feed animals, but humans have started realizing the innumerable health benefits of this crop. Its health benefits come from the fact that wheatgrass is rich in chlorophyll, which has antibacterial properties and is a natural healer. Studies show that when it is grown organically, it absorbs 92 of the known 115 minerals from the soil. That is why more and more people are turning towards selling organic wheatgrass powder as a natural supplement [1].

In this article, we’ll look at the benefits of having organic wheatgrass powder and why it is important to have it as part of your diet.

Before we dive into the benefits of organic wheatgrass powder, let’s look at its nutritional value and its preparation method.

Wheatgrass belongs to the Triticum aestivum family and is harvested usually after 7-10 days of sprouting of the wheat plant [2]. It is also called by many as the ‘green blood’ due to the high level of chlorophyll in it. Wheatgrass has very few calories but high content of vitamins, minerals, proteins, and enzymes.

Wheatgrass can be consumed in many forms, including tablets and organic powder. Here are the top six benefits of having organic wheatgrass powder and why it is an excellent food supplement.

1. Rich Source of Nutrients and Antioxidants

As seen above, organic wheatgrass powder has several essential minerals and vitamins, including Vitamin A, C, and E, along with minerals like iron and calcium. It also includes antioxidants such as glutathione to fight free radicals and prevent oxidative cell damage. These antioxidants are known to relieve stress and improve cholesterol levels.

Cholesterol is required in the body to produce hormones and bile. But too much of it can block arteries and increase the risk of heart disease. Lab tests on animals indicate that wheatgrass can significantly reduce cholesterol levels, including “bad” LDL cholesterol and triglycerides.

However, there is a need to conduct further studies on humans to validate these results on animals.

High levels of blood sugar can lead to a variety of symptoms, such as frequent urination, fatigue, headaches, and thirst. If untreated, it can have serious ramifications, including diabetes, nerve damage, vision impairment, and skin problems. Consuming organic wheatgrass powder is said to control blood sugar and even reduce it!

Inflammation can happen as a normal bodily response to an infection or injury. However, chronic inflammation can be a sign of something serious such as heart diseases, cancer, or even autoimmune disorders. Studies show that having wheatgrass can help reduce inflammation when taken regularly over a period of time. Chlorophyll present in wheatgrass has anti-inflammatory properties that inhibit the activity of certain proteins responsible for causing inflammation.

Several health-conscious people have started incorporating organic wheatgrass powder in their diet to boost weight loss. Wheatgrass is a source of thylakoids, which has the potential to increase satiety and promote weight loss. Studies indicate that having a high-carb meal full of thylakoids can intensify the feeling of being full by releasing the hormone that lowers hunger pangs.

Risks and Side Effects

Wheatgrass is gradually becoming popular in our diets, and therefore, studies on its effects on the human body are gradually increasing. Most research shows that wheatgrass has no adverse side effects, but this may largely depend on the form and type of product.

Having organic wheatgrass is the best way to avoid unwanted reactions. People with celiac disease, and who are gluten-sensitive can still enjoy wheatgrass since it does not contain gluten. Some people may experience gastrointestinal problems initially, but it gets better within a few days. It is advised not to use wheatgrass as a substitute for any medical treatment. Consult your doctor first as it might interact and react with other medications.

If you experience any nausea, headaches, or diarrhea following the consumption of wheatgrass, you should reduce the intake immediately.

There are many ways to consume wheatgrass. One such method is by using organic wheatgrass powder or raw wheatgrass in a smoothie or juice. However, the smoothie can be overpowering for your taste buds. To make it more palatable, you can try mixing it with ingredients like pineapple or in milk, honey, or fruit juice.

Many companies sell wheatgrass capsules, which has no smell or taste. There are some flavored capsules also available in the market.

Wheatgrass is gaining prominence as a supplement in the diets of many. While there are not enough studies on humans that conclusively specify these benefits, research shows promising results and nearly zero side effects of incorporating it in a healthy diet.

Most people seem to tolerate wheatgrass well and are able to realize the nutritional benefits from it. However, if you are suffering from any medical condition, we would strongly advise you to consult your physician before including it in your diet.

Try 24 Mantra Organic’s Wheatgrass powder and enjoy the benefits of this superfood.