The many benefits of black pepper tea: A detailed guide. - 24 Mantra Organic

The many benefits of black pepper tea: A detailed guide. - 24 Mantra Organic 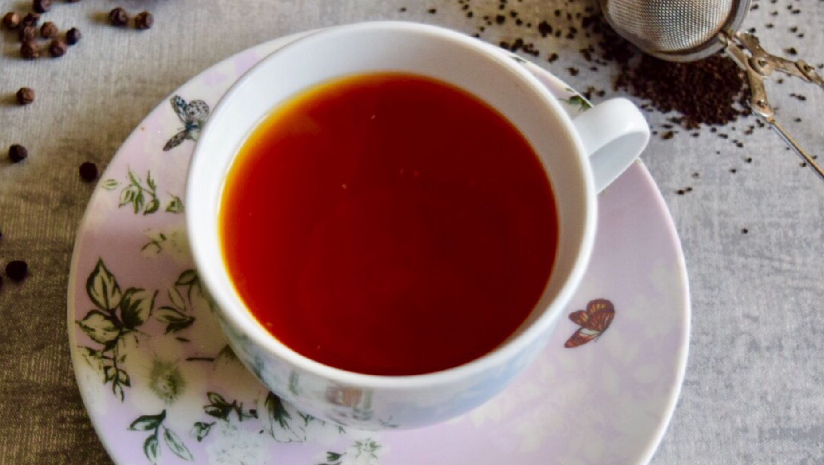 The Benefits of Black Pepper Tea – A Detailed Guide

The land of spices is the origin of a myriad of flavours, fragrances and vibrant colours. It will come as no surprise, therefore, that black pepper originated in India, and more specifically, in the state of Kerala.

Ancient Egypt, Greece and Rome were among the first empires to import black pepper from the Indian Subcontinent. The commodity had become quite popular in these regions as well as several parts of Europe who began to incorporate it into their food.

In India, black pepper (even now) is considered as a key ingredient in concocting traditional, Ayurvedic medicines aside from being used as a seasoning and flavouring agent.

Widely referred to as ‘black gold’ at the time, black pepper made appearances in early medicinal documents like the Susrutha Samhita (an ancient text written in Sanskrit).  It is also known for its various medicinal properties.

Black Pepper is said to consist of anti-inflammatory and antioxidant properties. In tea form, ‘the king of spices’ has been recognized for its various health benefits and uses. This article will endeavour to discuss the same.

Black pepper is a flowering vine that is sun-dried in order to derive the fruit. The dried fruit of this flowering plant is known as peppercorns or black pepper (in its powdered form).

While a hot brew of black pepper tea is infused in spice, flavour and aroma, the more organic, the better, the decoction is ideal for an array of health benefits as well. Let’s look at some of them here:

Alleviates cold and cough symptoms – Aside from being used for its medicinal properties in traditional, Indian medicine, black pepper tea was utilized for the same even in ancient Chinese medicine.

According to a few sources, pepper works as a stimulant for circulation and proper flow of the mucous whereas the honey in the tea works as a “natural cough suppressant”.

How to make Black pepper tea for colds:

For best results, you can follow this routine thrice in a day until you feel like the congestion and sinus is no longer troubling you.

Boosts Immunity – Some sources claim that the piperine (a white, crystalline, alkaloid) in pepper boosts immunity. Moreover, consuming black pepper tea with a healthy dash of ginger will do you a world of good. Because the anti-inflammatory compounds present in ginger is said to fight pathogens and free radicals present in your body.

How to make black pepper tea:

Reduces Asthma – According to the International Journal of Pharmaceutical Sciences and Research, herbal practitioners are in the habit of tea by adding some amounts of powdered black pepper into green tea, in order to reduce asthmatic symptoms in patients.

Black pepper tea aids in weight loss – As per the claims of some sources, the piperine in black pepper is said to improve the metabolism rate and digestion of people. The piperine compound helps in reducing the accumulation of fat in the body. The source further adds that by incorporating a daily diet that includes black pepper tea would help in the management of obesity.

The spice is made up of various vitamins, phytonutrients, electrolytes and minerals such as Potassium, Manganese, Calcium, Zinc, Magnesium and Iron. Here’s a detailed look at the nutritional content of peppercorns.

This is the nutritional value per 100 gm of peppercorns:

As an organic brew that promotes health and nutrition, black pepper tea has it all. Packed with flavour, aroma and spiciness, the decoction not only treats flu-symptoms and other health conditions, but it also makes for a soothing, calming and delicious tea.

Its nutritional content alone is a thing to behold. And the fact that the tea can be brewed in so many ways (by adding other spices and sweeteners of your choice), it just goes to show how accommodating the tea, is in general. Its simple, quick and easy to make and can be had at any time of the day and for any occasion.