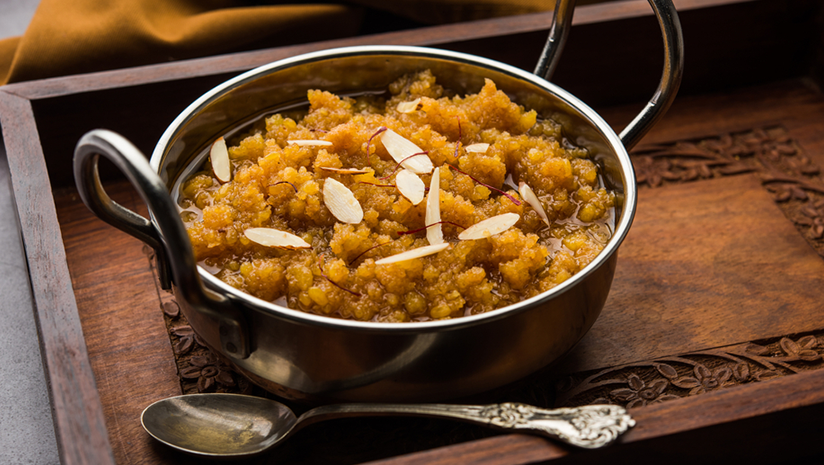 The delicious aroma of besan halwa, especially the organic variant, is something that fills your entire household when you make it. In fact, the aroma is enough to give your family members some serious hunger pangs. The halwa is usually prepared in some regions for special occasions like Ganesh puja. However, you don’t need an occasion to indulge the sweet tooth of you and your dear ones.

The best part of this dish is that it’s super simple to make but tastes absolutely yummy. So, without further delay, let’s take a look at the ingredients and steps for the besan halwa recipe.

1. To prepare the besan halwa recipe, heat up about 1.5 cups of milk in a thick-bottomed pan until it starts boiling.

2. While keeping the milk for boiling, add about ¼ cup of ghee in another thick-bottomed pan. Lower the flame after the ghee melts.

3. Add one cup of besan and mix it nicely with that ghee by continuously stirring it on a low flame for fourteen to fifteen minutes. It will release a nutty aroma. It might even take you less time, depending on the thickness of the base of the pan.

4. When the besan is well-roasted, it releases ghee and becomes aromatic.

5. You will have to pour the boiled milk into the pan in batches while keeping the flame low. Keep pouring the milk in cups and simultaneously stir the pan to get the milk mixed well with the roasted besan.

6. Stir this mixture constantly for about a minute or two before adding 1/3 cup of sugar. More sugar can be added to this besan halwa recipeif you like. Stir it for five to six minutes in a way that no lumps get formed.

7. The mixture will start to thicken soon enough. But, the halwa will only be smooth and lump-free if you keep stirring the mixture.

8. Add the chopped almonds and pistachios, along with ¼ teaspoon of cardamom powder, and mix well.

9. You will notice that the besan halwa is leaving ghee. The halwa will not stick to the edges of the pan after it has been cooked. Switch off the flame and let the halwa cool down and thicken. Garnish it with saffron strands.

So, now that you know how to make yummy besan halwa, start getting the ingredients together to try the recipe for yourself. It might involve quite a workout for your arms thanks to all that stirring, but the taste makes all the effort completely worth it. and do not forget to bring all the organic ingredients as they are 100% natural, free of chemicals and pesticides and taste better too.