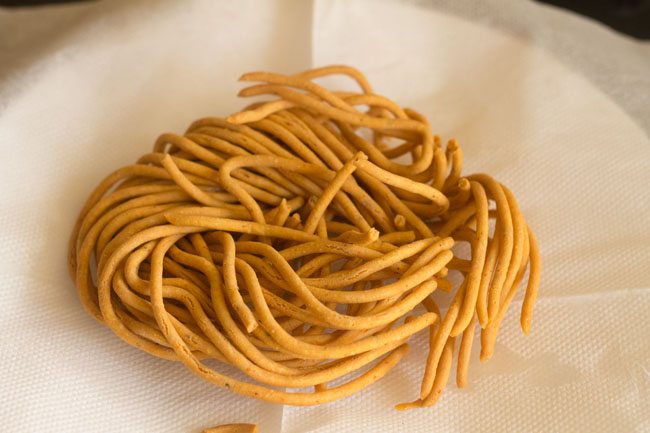 Who doesn’t love the crunchy yellow noodles you get on sev puris and other chaats?

The crisp texture of besan sev pairs well with the sweet, sour and spicy chutneys that flavour Indian chaats.

Besan sev as the name suggests is made with gram flour or chickpea flour. Besan is one of the staple flours used in Indian cooking. As besan is gluten-free, it is sometimes used as an alternative to wheat flour.

A cup of besan contains 356 calories, 20 grams of protein, 53 grams of carbohydrates, and 10 grams of fibre. It also contains folate, which is essential to women during pregnancy.

The packaged goods aisle in supermarkets is full of different varieties of besan sev. There are so many different flavours available too. The prepackaged besan sev is mass-produced with the help of big machines which are capable of churning out hundreds of kilos of sev per day.

But it is possible to make besan sev without a machine at home.

Usually, a small handheld sev maker is used to make besan sev. The sev maker comprises of two parts – a hollow bottom container and a top lid. In the hollow container, a ball of the besan dough is inserted, and then the top cover is attached which pushes out the long strands of sev into the hot oil to be fried.

The sev maker has disks that can be inserted, which lets you adjust the thickness of the sev as the recipe requires.

Here is an easy recipe you can use to make besan sev without a machine. All you need to take care while preparing this item is to ensure the consistency of the besan dough.

To get a perfect consistency, all the ingredients should be carefully measured before they are mixed. The recipe for making besan sev without a machine varies from person to person. Each chef has a combination and ratio of ingredients of their own they prefer to use to make sev.

The recipe here is as per Veg Recipes of India. You can go here to see the besan sev recipe as per Tarla Dalal.

The ingredients you need to make besan sev without a machine are,

With sev pressers, you get different disks with different size holes for making besan sev without a machine.

While preparing the dough, more spices can be added as per preference to make different varieties of the snack.

Since the recipe for making besan sev without a machine is simple, it can be modified with different spices, and the quantity can be doubled or tripled easily.

Besan sev is a versatile item. It can be eaten as a snack to accompany your chai, or it can be used as a topping on several chaat items. Sev can even be added as an additional crunch on salads and sprouted legumes to elevate the bland flavours a little.

You don’t need to rely on store-bought sev to satisfy your craving for fried food. As you have seen, it is not only possible but also extremely easy for you to make besan sev without a machine at home.