Natural Remedies with Ajwain for cough for all! - 24 Mantra Organic

Natural Remedies with Ajwain for cough for all! - 24 Mantra Organic 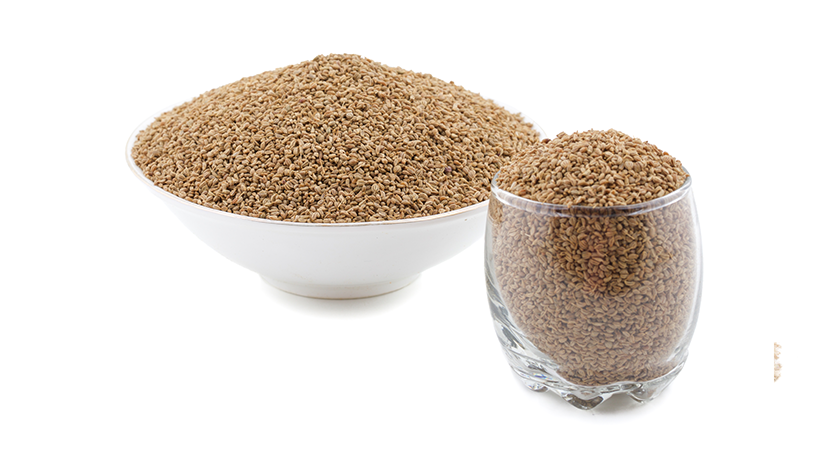 Cold and cough are common in babies, kids and adults. A little change in the season leads to their continuous coughing and nasal discharge. Apart from that, the onset of winter brings many diseases, including cold and cough, as the viruses are more active during this season. People with low immunity become their prey easily. Hence you should be ready to face cold and cough with ajwain at your side!

Research has shown that ajwain has antitussive properties or cold-suppressing properties. Their effects are more than codeine which is generally prescribed to treat common cold and cough. Not only that but also the lungs of the asthmatic patients can have an enhanced airflow because of ajwain.

If you are thinking about how to consume ajwain for cough, here are some remedies.

Ajwain can be used in different ways to serve as an effective remedy for both cold and cough. Here are they:

1. Ajwain for cold and cough potli

This is an amazing remedy that one can try for all the babies, kids and adults. Dry roast some ajwain on a tawa and once they start to leave aroma, transfer them into a clean cotton cloth. Tie it like a potli and press it on your kid’s chest. However, make sure that the potli is not too hot. Otherwise, it will burn the delicate skin of your kids. Following this process, every day twice will help to clear both the nasal and chest congestion.

Hot steam works wonder for a blocked nose. And when you infuse the hot water with a handful of ajwain and take its steam, the blocked nose becomes clear faster than normal hot steam.

3. Ajwain for Cough – Make a Potli with Garlic

Roast of two cloves of garlic and a handful of ajwain until you get a nice aroma. Make a potli with them but do not use it as a hot pad as your kid or baby might not like the pungent smell of garlic. Instead of that, placing the potli below the pillow or at a corner of the cot is ideal. After inhaling the smell for some time, their nose and chest congestion will start to leave. Adults can use this potli as hot pad easily.

4. A mixture of Ajwain, Tulsi and Ginger

Do you want to use ajwain for cold and cough? Then boil some tulsi or basil leaves with ajwain and chopped ginger for about 15 minutes. After that strain, the mixture and cool it and give to your kids twice a day 1-2 teaspoon.

If you want to make this mixture for adults, add 4-5 whole peppercorns and 1/3rd cup of jaggery in the boiling water. This mixture is effective for both cold and cough and colic. However, if your baby is below six months, don’t give them this mixture without consulting doctor.

5. Ajwain for Cough – Opt for An Effective Oil Massage

There are a few people who might not like the bitter smell and taste of ajwain. For them, this oil massage with ajwain is extremely beneficial. Mix some ajwain in hot oil and keep it for some time so that the nutrients of ajwain get infused in the oil. Now massage your chest, nose and back to release the nasal and chest congestion.

Mix a spoonful of jaggery with roasted ajwain powder and have the mixture every day in the morning to get relief from cold and cough.

According to BioMed Research International, ajwain has the capacity to treat not only cold and cough, but also acute pharyngitis. Here are some of its benefits:

Nutritional Benefits of Ajwain for Cough

From 100 gms of ajwain, you can get the following:

Though regular ajwain for cold and cough is good, it is wise to opt for the organic variety to get the utmost benefits. Organic ajwain is cultivated naturally without using chemicals and pesticides. Their quality remains pure, and no water retention is there.

So, now you have got a thorough idea about ajwain remedies for cold and cough. Next time, the virus attacks you, get rid of it with ajwain for cough remedy easily.