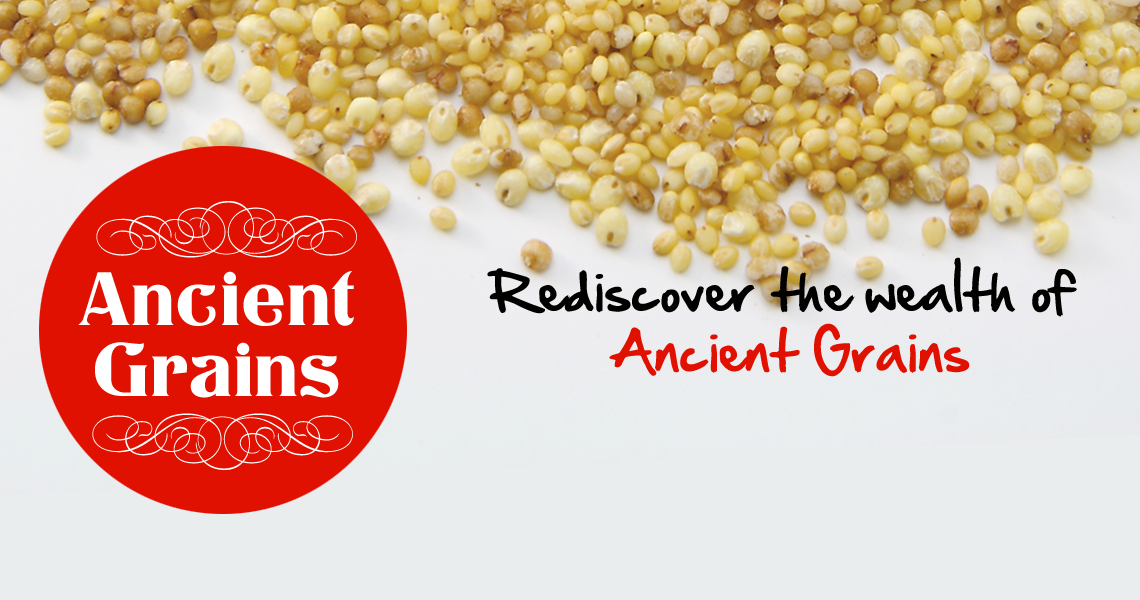 The “Whole Grain Council” defines ancient grains as “Grains that are largely unchanged over the last several hundred years”. Although there is no official definition of “ancient grains”, all whole grains in the larger sense are “ancient”, and can be traced back in history. Therefore, ancient grains are a group of grains or pseudo cereals that are considered to be unchanged in the recent millennia.

Modern varieties of grains have been developed over time through mutation, selective cropping, research and other advance methods. Several ancient grains have been known to be worshipped by ancient civilizations like the Aztecs, the Greeks, the Egyptians, the Inca people and these grains were also used as a part of religious ceremonies.

There are numerous health benefits of ancient grains as they are seen as healthier, more natural, and provide more vitamins, minerals, fiber, protein, omega 3 fatty acids and antioxidants. This is partly because they are rarely eaten in processed form.

All this being said, not only are these grains better for you, but they are also incredibly tasty. While some of the grains belonging to the category of ancient grains may be more beneficial to health as compared to common grains like wheat and barley, the same does not hold true for all.

Gluten refers to a mix of proteins found in wheat, rye, spelt & barley. Gluten is mainly known for its viscosity. When flour is mixed with water, the gluten forms a sticky network that has a glue like consistency. The gluten in wheat enables the mold ability of dough and the ability of bread to rise when it bakes.

Still confused about what exactly gluten is?
Watch this video to understand the details of what it is.

Why is gluten bad for some people?

Most people tolerate gluten just fine however it can cause problems with certain health conditions this includes celiac disease, gluten sensitivity, wheat allergy and other such conditions.

Now that we have understood what gluten is and how it has a negative effect on some people, let us find understand which of the superfoods or ancient grains are free of gluten and which of them are not Millet is another gluten-free seed with high nutritional value. It is an excellent source of protein and is high in fiber, low on carbs and B vitamins. Millet is also particularly high in magnesium, giving the seed heart-protecting properties.

One of the earliest cultivated crops, it is a staple in Africa, China and India. Millet is a heart-healthy choice because of its status as a good source of magnesium. Magnesium has been shown in studies to reduce the severity of asthma and to reduce the frequency of migraine attacks. The phosphorus provided by millet plays a role in the structure of every cell in the body. One of the most nutritious ancient grains that mankind has ever known is Quinoa. Many times it is referred to as the mother of all ancient grains and is considered to be a super food by many nutritionists across the globe.

There are many reasons for Quinoa’s popularity and one of the main reasons was that it was one of the few crops that could be grown and harvested at altitudes of 10000 – 20000 ft. above sea level. Another important property of Quinoa was the fact that it could withstand Frost, Heat and draught like conditions.


Quinoa is one of those foods that have it all, it is rich in protein, rich in fiber content, a good source of iron, magnesium, it is gluten free and easy to digest.
Quinoa’s origin can be traced back in time from the Aztecs, to the Andeans to the Inca People, who have cultivated, harvested, grown and even worshiped Quinoa. It one of the earliest known food plans, Amaranth is also known to be cultivated by the Aztecs and the Inca People.
Like Quinoa, Amaranth is also a gluten free ancient grain and is a rich source of protein, fiber, potassium, calcium and minerals such as iron, manganese, phosphorous & copper. Cooked amaranth leaves are an excellent source of vitamin A, vitamin C, calcium, manganese and folate.


Amaranth and quinoa are non-grasses and are called pseudo cereals because of their similarities to cereals in flavor and cooking. To this day, amaranth grains are toasted much like popcorn and mixed with honey, molasses or chocolate to make a treat called alegría, meaning “joy” in Spanish. Buckwheat is known for its unique triangular shape and is in no way connected to wheat or a form of wheat. Apart from being a gluten free, buckwheat contains niacin which helps release energy from food. Buckwheat is extremely healthy and is often used in salads and side dishes.


The nutritional properties of buckwheat are numerous. It contains high levels of protein and is very rich in vitamins and minerals. A 1995 study from the Johns Hopkins Medical Institute showed that eating 30 grams of buckwheat daily can lower blood pressure. And because buckwheat grain is digested more slowly than other carbohydrates it can leave you feeling fuller longer and improve glucose tolerance among the carbohydrate sensitive. Teff is a fine grain about the size of a poppy seed that comes in a variety of colors, from white and red to dark brown. Teff grows predominantly in Ethiopia and Eritrea, and thrives even in difficult climates.

Teff’s history traces back thousands of years, to ancient civilizations of Abyssinia, a gluten-free grain with a mild flavor, teff is a healthy and versatile ingredient that can benefit people with diabetes, can help control weight and is fibrous and is known to keep your colon under check. Check out this amazing article of Masterchef star Daniel Churchill where he shares three ways to cook with teff. He shows us how to make these three beautiful recipes, and you guys have to try them out whenever you get your hands on some Teff. These small grains have a soft, starchy texture and slightly sweet flavor. You can pop them like popcorn, though the grains are a lot smaller than corn kernels.

According to the “wholegrain council” Sorghum is the 5th most important cereal crop in the world. Being gluten-free isn’t sorghum’s only plus point, sorghum is usually eaten with all its outer layers thereby retaining majority of its nutritional properties. It is known for its high antioxidant properties which are believed to lower the risk of cancer, diabetes, heart diseases and some neurological diseases. Originally, they only grew in South America, which made the seeds an important food for the Aztecs and Mayans.

Chia seeds have repeatedly been labelled a superfood, meaning that they have scientifically proven health benefits, and as that interest spurs new research scientists have found a number of reasons to consume them including cancer prevention, weight loss assistance, and an increase in physical endurance.

Here are 17 amazing benefits of chia seeds that you didn’t know about and to know more you must check out this wonderful article by Cooking Detective on the 17 Benefits of Chia Seeds and beautiful recipes you can use them in. Oats, sometimes called the common oat, is a species of cereal grain grown for its seed. Oats are rich in soluble fibers which help in lowering cholesterol levels and are significant sources of dietary fiber.

Oats have innumerable health benefits due to the nutritional vales that they possess. They help in preventing cardiovascular disease, keeping blood sugar levels in control, reduce risk of cancer, help in weight loss because of its low calorie content and slow digestion and it also enhances the immune system. Since Freekeh is a form of wheat it does contain gluten, so if you are someone who is living a gluten free life then this is not the food of choice for you. Freekeh is a type of wheat that gets harvested when it is still green in colour and undergoes a process of toasting and the grain which is still inside is moist and hence does not get burnt. The process of toasting and crushing of the outer roasted portion leaves behind a firm, slightly chewy, earthy and nutty flavored substance

It is not only full of fiber but is also full of essential nutrients such as selenium, potassium and magnesium. Like quinoa, freekeh makes an excellent source of protein. Freekeh is an extremely apt choice of food for people with diabetes or people who want to control their blood sugar levels. Kamut is a type of Khorasan wheat. Kamut is an ancient cereal grain related to durum and it was discovered in King Tut’s tomb.

Kamut is extremely rich in carbohydrates, protein, minerals and is also known to contain 65% more amino acids. Kamut is blessed with high anti oxidizing properties which is good for one’s immune system. Farro is an Italian word that encompasses three varieties of heirloom grains: einkorn, spelt and emmer wheat and spelt is a type of farro or hulled wheat.
Officially known as Triticum, its origin can be traced back to Iran around 5000 – 6000 BC. Like Kamut & Freekeh this is not gluten free and should be avoided by gluten intolerant people.

Spelt contains a wide variety of nutrients and is rich in protein, folate, magnesium and selenium. Spelt has a nutty flavor to it and is tasty and it is extremely fibrous. Additionally, spelt contains small amounts of calcium, selenium and vitamins B1, B6 and E. Farro is an Italian word that encompasses three varieties of heirloom grains: einkorn, spelt and emmer wheat. Therefore, Emmer is a type of Farro or ancient hulled wheat.

Today emmer is primarily a relict crop in mountainous areas. Its value lies in its ability to give good yields on poor soils, and its resistance to fungal diseases. Emmer is grown in Armenia, Morocco, Spain (Asturias), the Carpathian Mountains on the border of the Czech and Slovak republics, Albania, Turkey, Switzerland, Germany, Greece and Italy.

Like other types of wheat Emmer is rich in Proteins, carbohydrates, minerals like calcium, iron and sodium and is a very good source of fiber. Einkorn is the oldest wheat known to scientists, and is considered man’s first wheat. The term einkorn is derived from the German language and interpreted to mean “single grain”.

the first domestication of wild einkorn was recorded approximately around 7500 BC. It is believed to originate from the fertile areas of the Tigris-Euphrates regions.

The wheat we eat today isn’t like they ate thousands of years ago. In nutrition sampling tests, Einkorn has been found to be a “more nutritious” grain. Einkorn contains higher levels of protein, essential fatty acids, phosphorous, potassium, pyridoxine (B6), lutein and beta-carotene (lutein).